Report from Write the Docs Sydney

This week we hosted the first ever Write the Docs meetup in Sydney. It was great to see so many familiar faces and to meet so many new people too.

The Sydney meetup is part of the Write the Docs Australia group, founded by Swapnil Ogale. This was the Australia-wide group’s second meeting, after the kickoff in Melbourne in September.

We had 22 attendees at the inaugural Sydney meetup. The venue was the Google offices in Pyrmont.

Swapnil was an excellent host. Between the two presentations (see below) he asked attendees to introduce themselves and say what they liked most about technical documentation or being a technical writer. 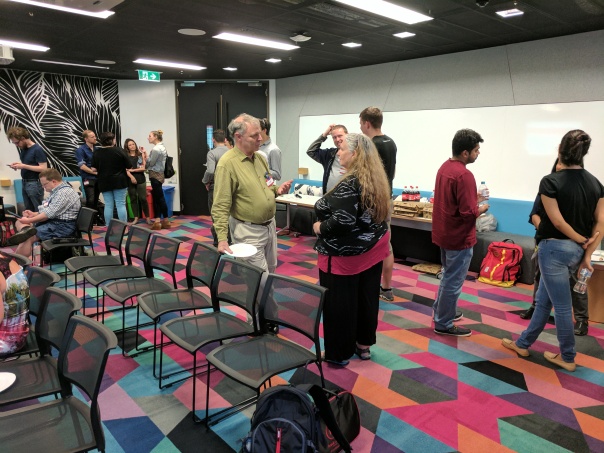 Craig’s presentation was amusing and engaging. He told the story of how technical writing started at Campaign Monitor as a community building role, but it quickly became apparent that it was a core technical writing role. Quite quickly, the two writers in the company felt that their role description and placement in the company didn’t reflect the value that technical writers bring to an organisation. They decided they needed to join a product team.

Craig described the two years of adventure he and his co-writer have had, attempting to get into a product team. They’ve not yet succeeded, Craig said with a laugh, but he gave a zestful account of the lessons learned, and the steps they’ve taken towards that goal. One of the questions that’s arisen is this: Is product the right place for technical writers? An attractive alternative is to be part of the marketing team.

This quotation from Craig’s presentation in particular rang true with me:

Define your own value, and never stop telling people.

Here’s the recording of Craig’s presentation:

Swapnil Ogale presented his summary and take-aways from the recent Write the Docs Prague conference.

Swapnil talked about these topics:

70% of participants are working on dev docs, APIs and UI text.

Here’s the recording of Swapnil’s presentation:

Where next for Write the Docs Australia?

I’ve been lucky enough to attend both meetings of the Write the Docs Australia group. Perhaps I can keep a good thing going and join the third, wherever it may be. Brisbane, anyone? 🙂