APIs, maps and apps at stc17

This week I’m attending STC Summit 2017, the annual conference of the Society for Technical Communication. This post is a summary of the session I presented.

My session was titled “A tech writer, a map, and an app”. I told the story of my odyssey into app development, and used my own journey as a way of teaching attendees about apps, APIs, code, maps, open source, and hackathons.

The slides are available on SlideShare: A tech writer, a map, and an app. 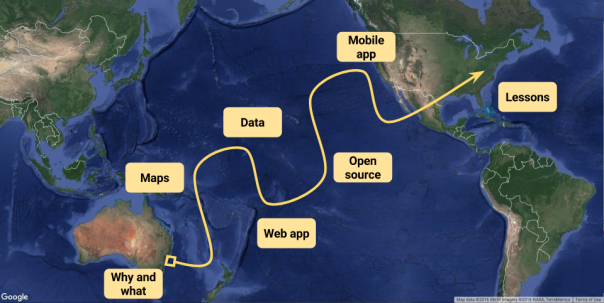 We explored some technical details:

And we examined how such a project can help develop your soft skills:

There’s more about the app on this page: about Tech Comm on a Map.

Thanks to everyone who attended the session!

We held the second Write the Docs meetup in Sydney on 2 March. The presentations were on moving into API technical writing, and the story of the Corilla documentation platform.

There was a good crowd at this meetup – around 20 technical writers descended on the Campaign Monitor offices in central Sydney. We were treated to a breath-taking 360-degree panorama of Sydney from the 38th floor of the building, and a couple of entertaining, informative, very different talks.

The recording of the session includes both talks, and is available on YouTube:

The first presentation was from Priya Varghese, a technical writer at Google. Her talk was titled Transitioning into API Tech Writing. A year ago, Priya started work at Google as an API technical writer. Before that, she had many years’ experience as a tech writer for other audiences in the medical, security and education industries.

Priya talked about the questions she had before embarking on this new role, such as: How different is it from tech writing for other audiences? Do I know enough to explain APIs to developers? What if I don’t know how to code? Can API tech writing be fun? Her presentation gives an overview of APIs and the developer audience, the role of an API tech writer, the things you need to know, and the skills you need to acquire. One thing Priya strongly recommends is a mentor, and she finishes her talk by wondering if we should develop mentorship programs to guide and instruct technical writers.

David Ryan, co-founder of Corilla, told the story of the development of Corilla and the forming of a startup. Corilla is an online documentation platform for technical writers, providing documentation authoring, publication and version-control tools. David’s talk was fun and educational, with intriguing glimpses of the roller-coaster ride of a startup founder.

David described how he and his team had the original idea for a new tool while working with a set of tools that was bloated, clumsy, and not designed for technical writing. Their new tool quickly became popular at Red Hat, where David was working at the time. With Red Hat’s blessing, he and his colleague branched out to form their own startup. And the rest is history. Two years later, Corilla is an alumni of the NUMA accelerator in Paris and has customers in more than 80 countries. Watch the video to hear David talk about the journey from then to now.

This week I attended Write the Docs NA 2016, which wrapped up a couple of hours ago. This post is a summary of impressions, with links to my notes on some of the sessions I attended.

One thing that strikes me about Write the Docs is that I’ve spent much of my time talking to people. This is partly because half of each day is devoted to unconference sessions as well as formal presentations. In the unconference sessions there’s a facilitator rather than a speaker, so everyone can contribute to the discussion. Another reason I’ve done so much talking to people is that there are so many interesting, friendly, enthusiastic people to talk to.

There were approximately 400 attendees. They’re people who love documentation – that is, people who know its value. Based on a show of hands at the introductory session, approximately 60% of the attendees are technical writers and about 15% are software developers. Others are UX specialists, support engineers, librarians, knowledge management specialists and more.

Another thing that strikes me is that the pre-conference activity was a half-day hike through the forested hills around Portland. Now, that’s my kind of activity.

These are the notes I took from some of the sessions I attended:

For recordings of most of the talks, take a look at the Write the Docs 2016 YouTube channel. Here’s State of the Docs by Eric Holscher:

On the first day of Write the Docs, we gathered at Centrl Office to write docs and talk about API documentation. It was great chatting to so many enthusiastic, knowledgable writers. People got together and contributed to open source documentation with Mozilla, Google, and more. We filled three rooms to the brim. This photo shows the scene early in the day, before most people had arrived.

Days two and three were at the Crystal Ballroom. What a lovely venue! Here’s the view from the stage looking out across the conference attendees. 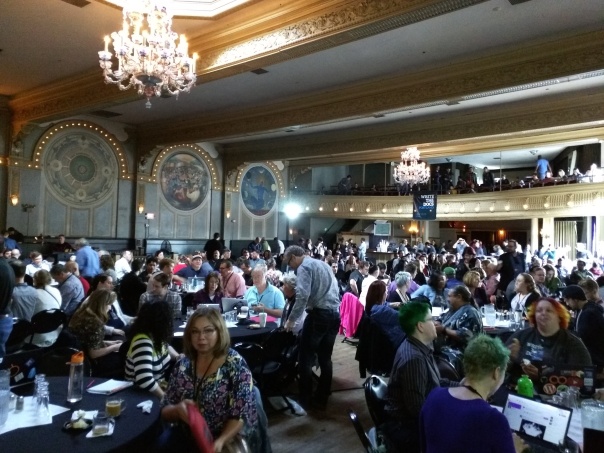 A closer view of the murals:

My travelling bookmark, Mark Wordsworm, has some pictures and words about the city: Lost in Portland, Oregon.

A huge thank you to the organisers of Write the Docs NA 2016. This is my first experience of a Write the Docs conference. I’ve wanted to attend for a couple of years, but it’s a long way from Sydney, Australia, to any of the conference venues. This year, everything came together and here I am. It was a great experience, and well worth the trip. Thanks!

This week I’m attending Write the Docs NA 2016. I’ve just attended a fast-paced, exciting session: “Code the Docs: Interactive Document Environments”, by Tim Nugent & Paris Buttfield-Addison. These are my notes from the session. All kudos goes to Tim and Paris, and any mistakes are mine.

Tim and Paris warned us up front that they speak Australian. Suddenly I feel right at home. 🙂 They also write books, are academics, train people in coding, and do other stuff. They’ve noticed that we need better linking between the documentation and the code. Otherwise things break too quickly.

What is an interactive document environment?

Interactive document environments put live code and documentation side by side. You can write content and embed code that runs within the doc.

In the Apple environment, before Tim and Paris started using Swift Playgrounds, they noticed that people got lost. People were switching between docs, code, notes, and couldn’t keep up. So Paris and Tim investigated the tools and made up the term, interactive document environment.

The code, the person’s own notes, and the official documentation all in one place.

Swift is Apple’s new language. Paris and Tim think Swift is the bee’s knees. Swift Playgrounds is a core part of Swift. It’s an interactive coding environment, designed for prototyping, learning and experimenting.

To use Playgrounds, download Xcode from the Apple Store.

Tim and Paris gave a demo of Swift Playgrounds. It was impressive to see how you can embed code and see it execute right on the page.

Swift supports emoji, so of course the demo included emoji. 🙂 You can also add pagination, with a “Next” link at the end of the page. The code is running all the time, and you see the output on a panel next to the page.

We also saw Apple’s example, called Newton’s Cradle and UIKit Dynamics, which runs in Xcode. (Apple’s announcement blog post has a screenshot and a link to the downloadable demo as a zip file.) The code is live, so you can change it and play with it.

Tim and Paris showed us Regex Golf with Peter Norvig. (Sign in, scroll down the page, and run the code. Change the code and run it again. It’s worth it.)

To try creating content in this environment yourself, download Jupyter Notebook. (The process is a little tricky.)

Paris and Tim predict that these environments will become more stable and will support more languages and projects. These environments will replace books and articles. There’ll be better support for non-narrative docs. It’s a natural evolution of API guidelines where you give the developers a cURL command to try the API, and even those more advanced docs that supply a button to run the code live.

Thanks Tim and Paris, this was an entertaining and informative talk. Notes and slides will be at lonely.coffee and blog.paris.id.au.

This week I’m attending Write the Docs NA 2016. Today is a kind of pre-conference day. There are doc sprints, and an API docs meetup.

At the moment, I’m in the API docs meetup. The day starts with a few set talks, to be followed by “open space” sessions. Here are my notes on the first couple of talks about documentation tools.

The first talk of the day was “REST API documentation generator” by Rafa of Mapbox. The Mapbox team writes the documentation in Markdown. In the background is Jekyll and GitHub pages. Rafa walked us through a couple of pages of the documentation, which includes code samples, generated for various programming languages, as well as hand-written words.

Rafa said this set of tools works really well for collaboration on writing the docs.

There was a lively discussion at Rafa’s session, with a very engaged audience. We discussed topics such as reader feedback, automated testing, size of the doc set, versioning, and more.

All this information was packed into half an hour! Thanks Rafa for a great session.

You need to automate,  but be ready for the areas where you need human intervention:

Jennifer walked us through the Capital One Platform documentation, and particularly the SwiftID webhooks, which is the output of the above processes. The hello world content is manually created. The source is all AsciiDoc, either generated from the YAML or hand-written. A member of the audience commented that it was good to see the manually-written content integrated with the generated docs.

Next, Jennifer discussed a different approach: creating documentation from tests. Jennifer talked about spring-restdocs, which adds the stubs for the documentation. You can then go and add the text later. How you automate your docs depends on how you’re building your API. The docs-from tests approach is useful particularly if you use the code first approach to creating an API. Your docs must exist in order for your tests to pass.

Thanks so much, Jennifer, for these tips on how to Swagger, and the hint about sprint-restdocs.