This week saw the 2019 conference of Write the Docs Australia. I was delighted to be able to take part in this event. So many good discussions, interesting talks, and lovely people!

On the Thursday afternoon of the conference, I ran an open source doc fixit. A doc fixit is an event where people get together to fix problems in a set of documentation. In the space of just two hours, a group of Write the Docs attendees contributed polish and shine to the Kubeflow documentation. Two fellow tech writers from Google assisted at the event: Alec Glassford  and Riona MacNamara.

The screenshot shows some of the PRs submitted on GitHub by the fixit participants. A pull request (PR) is a set of changes that a contributor is presenting for merging into the open source project: 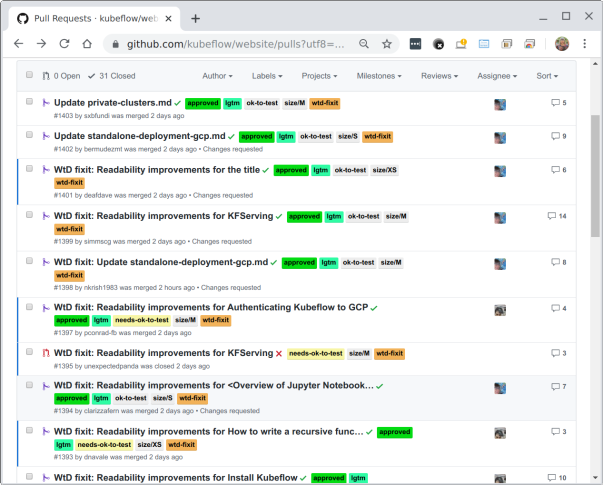 What do the resulting docs look like? One of the pages that received tech writer love was the guide to authenticating Kubeflow to GCP:

Approximately 20-25 people took part in the fixit. A few people paired up to work together, which resulted in 15 individuals submitting pull requests (PRs). Some people submitted two or three PRs, leading to a total of 31 PRs.

The participants were a diverse group. Most were technical writers, given that the fixit was part of a Write the Docs conference. A few people had prior experience of GitHub, but most were new to open source and GitHub.

Another important goal was to contribute meaningful improvements to the Kubeflow docs. Kubeflow is working towards a v1.0 release in January 2020. In the open source world, v1.0 is an important milestone, bringing certain guarantees of stability and polish. The v1.0 docs need to be polished too.

With the above in mind, I decided on a few tactics:

What happened at the fixit

At the start of the fixit, I presented a short talk introducing the concepts of open source software and documentation, and the goals of the Kubeflow project.

Then the participants chose a page to work on, based on the spreadsheet we had prepared, and started work.

Alec, Riona, and I moved around the room, answering questions and helping people do the initial signups and then submit their issues and PRs.

In between answering questions, we also reviewed the incoming PRs and approved each one when it was ready for merging into the docs repository on GitHub. The continuous merge/publish tools on the GitHub project merged the change and published the update in the docs.

All in all, things went smoothly. I’m very happy with the results. Huge thanks to the participants and to Alec and Riona for their help both before and during the fixit.

Alec, Riona and I were pretty busy helping the participants with various signup processes, GitHub idiosyncrasies, and other tricky bits. We didn’t have much time for reviewing and approving PRs. Next time, more assistants!

A number of participants commented that the initial process of starting to contribute was lengthy and a bit bumpy. People need to sign up to GitHub, sign the contributor licence agreement (CLA), open a page for editing, then follow the GitHub prompts to submit the change, then create a PR (twice, seemingly, as the UI is a little clumsy). People were delighted to know that much of the process is once-off, and their second PR went more smoothly.

On a side note: We were using the GitHub UI because it’s initially a simpler experience than the git command line. Personally, I much prefer the command line. It’s restful. When I sit down with my laptop and type git status, it’s as if I’m saying:

Hey git, it’s been a while. I got distracted by messier things, but I know you’ve been keeping track of the important stuff for me. Let’s get going.

Fixit participants said that they appreciated the opportunity to learn about open source and to have their first experience of working in GitHub.

During the general feedback at the close of the conference, people mentioned that they were pleased some parts of the conference involved active participation, instead of listening passively to talks for the full two days.

What else happened at the conference?

Write the Docs Australia 2019 was jam-packed with talks, workshops, lightning talks, and unconferences. Take a look at the full program.