← How to bootstrap an open source project – talk at KubeCon
Applying for the Google Sydney tech writing role? Some hints from me →

This week I attended the KubeCon conference in Seattle. The conference’s full name is KubeCon + CloudNativeCon North America 2018. It was huge, friendly, interesting, inspiring.

Most of the conferences I attend are tech writing conferences. This is the first time I’ve attended a highly “technical” software conference, and I wasn’t sure what to expect. Would all the sessions fly right over my head? Would the other attendees view me as an interloper? Would documentation feature at all? The answers are, “well yes some”, “no”, and “yes”!

KubeCon was huge. This year there were 8 000 attendees, which is eight times more than the last time the conference took place in Seattle, in 2016. It’s twice as many as last year, when the conference was in Austin, Texas

Part of the room in which the keynotes were held:

I took part as teacher’s assistant (TA) for the Kubeflow end-to-end workshop, run by Michelle Casbon and Amy Unruh. Kubeflow is a framework that helps make it easier to deploy and manage machine learning systems. (I work on the Kubeflow docs.) The Kubeflow session at KubeCon took the form of a codelab which was rewarding in that it showcased some very cool technology in a graphical way, though, as is still the case with most machine learning systems, the workflow was somewhat complex. (This is something we’re working on.) I’m very pleased I was able to help many people get their apps up and running.

Awaiting the start of the Kubeflow workshop:

Notes on sessions related to open source docs and community

I blogged about some of the other sessions I attended – those related to docs and/or community:

Thanks to the conference organisers, presenters, and attendees. I had fun, met good people, and learned a lot.

It was invigorating to attend an event where the technology and the community are thriving, growing, excited, and yes, just slightly chaotic. This year Kubernetes won the OSCON Most Impact award (OSCON = Open Source Convention). The word “community” is on everyone’s tongue, as much as the word “code”.

This is Seattle. It rained, but rain did not dampen our spirits.

Crossing from one conference building to the other in the Seattle rain: 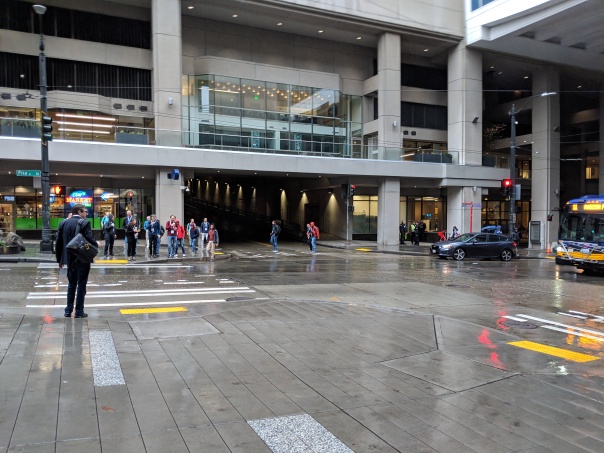 The talks and other sessions are available on the Seattle ’18: KubeCon and CloudNativeCon playlist on YouTube.

← How to bootstrap an open source project – talk at KubeCon
Applying for the Google Sydney tech writing role? Some hints from me →