← Google technical writer, 3 months in
How to start a YouTube video at a given point or time →

How to check Java syntax in your sample code

Let’s say I’ve put together some sample Java code, and I want to check the syntax. What’s the easiest way to do that? This post compares two of the many possible solutions I’ve found. The first is to use the Java compiler (javac) from the command line. The second is to use Eclipse’s built-in syntax checker.

The Java compiler (javac) is part of the developer toolkit that comes with Java. You can run javac directly from the command line. Eclipse is a free and open source IDE (integrated development environment). For checking Java syntax, I prefer Eclipse because it’s smarter about figuring out the root cause of the problem, and the messages it gives are easier to understand.

Kind reader, please note that I’m not a full-time Java programmer. I’m a technical writer building up her Java skills, and sharing information as she goes. So if I’ve made some silly mistakes, please tell me about them, and do it kindly. 😉

Check that you have Java, by opening a command window (called a “Terminal” window on a Mac) and running this command:

If not, download and install Java, making sure you get a JDK (Java Development Kit) rather than just a JRE.

Confirm that you have the Java compiler by running this command:

If not, check your Java installation to ensure you have a JDK (Java Development Kit) installed.

Wrapping a Java class around your code

An important thing to understand is that you’ll need to wrap your code within a Java class. Even if you only want to check a single line of code or an itsy-bitsy method, you’ll need the framework of a class to give it context.

Let’s assume I want to build a string that includes some constant text plus two variables, representing someone’s favourite colour and toy. I’ve cobbled together this code, which builds the string and also prints it to the command window (the standard system output destination) for easy verification:

Here’s a simple class that includes the above code:

Save the code in a text file called FavouriteToy.java. Note that the file name must match the class name.

Using the Java compiler to check your code

Run the Java compiler to compile your Java file into an executable class file:

If everything goes well, your code has passed the syntax checks and you’ll notice that you now have a new file called FavouriteToy.class.

But what if you’ve made a mistake? The compiler will display the error messages in your command window. For example, if I forget to put the semicolon at the end of this line:

Then I’ll see this in the command line:

That’s quite handy. It even tells me exactly where in the line the missing semicolon should be, by placing the circumflex (^) in the right spot.

Things get tricky, though, when there’s a more complex error or more than one error. For example, this is what happens if I leave out the closing curly bracket for the main() method:

Running the code on the command line

By the way, assuming your code has passed the compiler checks, you can run it via the command line with the java command. Here’s the command to run our sample class with a couple of input parameters, and the resulting output:

Using Eclipse to check your code

Eclipse is a free and open source development platform, including an IDE (integrated development environment) and a number of useful tools. The IDE includes a nice editing environment. Provided you let it know that your project is a Java project, it can do all sorts of fancy things for you.

Download the right version of Eclipse for your operating system. Installing it is simple: It’s just a matter of unzipping the downloaded file into a directory of your choice. See the installation guide.

Start Eclipse, and choose a workspace directory as prompted. You can leave it at the default. If the “Welcome” screen appears, close it.

Now you need to add a Java project, so that Eclipse knows what sort of files and project structure it will be dealing with. Choose “File” > “New” > “Java Project”. Enter a project name (like “TestPony”) and click “Finish”. You can leave all the other project settings at their defaults.

The file will appear in the Project Explorer, and will also open in the editor panel that occupies most of your Eclipse work area.

Paste your Java code into the editor panel. Eclipse immediately analyses the code and highlights errors.

This screenshot shows the Eclipse editor with my sample code. Two red circles with cross in the left-hand margin indicate lines with errors in them. There’s also a red squiggly underline on the offending portion of the line. I can hover over the red circle or the red squiggly line to see the error message: 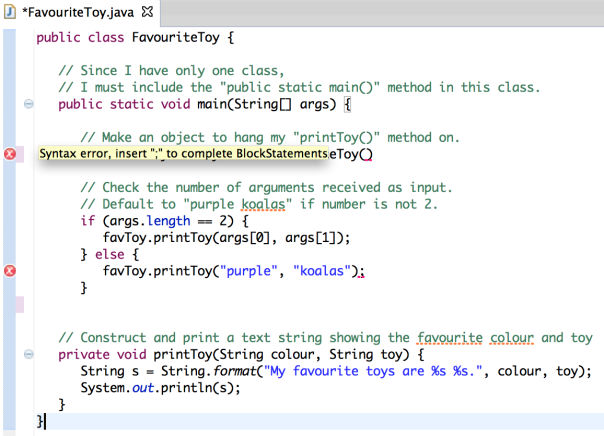 Here’s the neat error message for my second deliberate mistake, where I missed out a curly bracket:

I think you’ll agree that Eclipse’s message is much easier to understand than the 7 errors given by the javac command.

It was when I started getting more complicated Java errors that I really fell in love with Eclipse. It gives you suggestions on how to fix the problem!

← Google technical writer, 3 months in
How to start a YouTube video at a given point or time →