This week I attended a short introductory session to agile methodologies. An Atlassian colleague, Stuart Bargon, gave us a great overview of Scrum, Kanban and Extreme Programming (XP). We also had a brief discussion about how we can improve the integration of technical writing into the agile development process. These are my notes from the session.

To kick off the session, Stuart asked us what we already know and understand about agile methodology. There was an interesting range of answers:

Stuart discussed each of the principles of the Agile Manifesto, illustrating some of them with examples from his own experience.

I found this point interesting: Many of the ideas in agile methodology come from the way Toyota works. In particular, Toyota’s teams regularly stop and examine their work to see how they can improve the quality. See the book “The Toyota Way“.

These are the methodologies we touched on:

Generally, agile practitioners pick and mix these days. They take bits out of the various disciplines to suit their needs.

Stuart ran through the basics of the Scrum process:

Stuart gave us a number of good sites for information about Scrum:

Stuart remarked that the processes of Kanban are even simpler than Scrum.

The first step is to map the workflow of your development team. Stuart drew a number of columns on the board:

You then set limits on the columns, determining the number of cards (tasks or issues) that can exist in a column at the same time. For example, the above set of columns might have these limits: 4, 2, 1, 3, 3.

A good guide for setting the limits on the number of cards is the team size. For example, if you have 10 team members, the total number of limits across all the columns should add up to 10.

The idea is that anyone can write a story and put it on the board. You can reorder the items in the “Scheduled” column.

But you can’t put a card into the next column if the column is already full.

If a card cannot move into the next column, that means that the person who wants to move it must first tackle one of the cards in the column that is blocking the flow. In this way, the work flows through to the last column. Nothing has any value until it’s in the last column. There’s no value in the whole process unless it’s producing a number of cards in the “Done” column.

One of the attendees remarked that Kanban probably requires more behavioural change than Scrum.

Cards: Agile in a Flash

Stuart took us through some of the cards in a pack called “Agile in a Flash”. I’ve found these links referring to the pack: The Agile in a Flash blog and the entry on O’Reilly Media.

The cards cover the principles of standup meetings, retrospectives, values and principles, coding standards, code ownership, test-driven development, story prioritisation, why you would want to use agile methodologies, and more.

We took a quick look at how you prioritise stories.

Stuart told us a funny story of a developer who had tried to break a story into smaller stories. The story was a web form that was rather long, with may fields. He broke it down into a number of stories, each containing just one or two fields. Instead, he could have produced the whole form in one sprint, but with less complex validation and business rules. The first approach makes it difficult for testers and technical writers to do their work within a sprint, because there is no story that contains the entire form.

Stuart also discussed ways of prioritising stories by putting them in a quadrant, with axes such as complexity and business value.

In a sprint, it’s best to do the high risk things first because then you can deal with any issues that come up.

Contact with customers is one of the agile ideals. It’s interesting to note that, as technical writers working at Atlassian, we have quite a bit of contact with customers. We work on a wiki, where people comment on our docs. They also see our names and email addresses on the docs, and email us directly. And they can make requests of us and the development teams via our public JIRA issue tracker.

How can technical writers work within the agile framework?

We didn’t have time to discuss the specifics of how the different product teams work, and how we technical writers can better integrate our work into the processes. Just a few general comments came up.

We discussed the idea of getting the documentation included in the “definition of done” for a development issue. There are pros and cons. For example, a pro is that the development team will be more aware of the work the technical  writers are doing and of what needs doing. A possible con is an increase in the tension between the development and the technical writing teams.

Stuart mentioned that in an agile team, there’s less of the idea that a team member is a specialist. Rather, each developer can work on any story. This could also work with the technical writers when embedded in the teams. The technical writers can give more input during planning meetings, into the design of a feature and how it will affect other parts of the product. Similarly, developers can do the drafts of the documentation to ensure it is all finished within the sprint. If you use a task board, such as in GreenHopper, you can see quite clearly the stages that the various stories are in. If a number of them get stuck in the “documentation” phase, that will be clear to the entire team. Therefore people will be more likely to jump in and grab a documentation task off the sprint backlog. 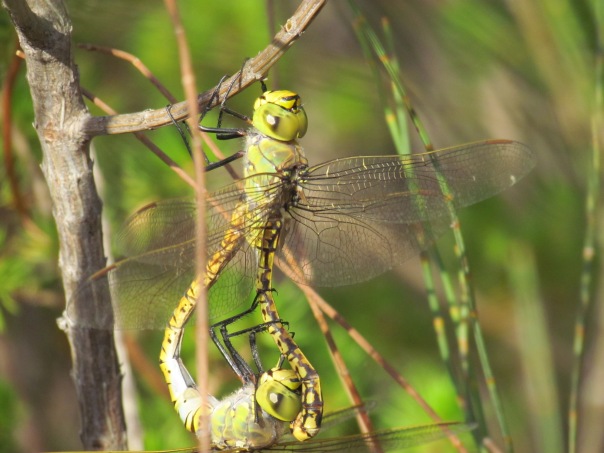 I took this shot a few days ago, of two dragonflies locked in passionate embrace. They don’t look very agile, do they? Actually, they zoomed around quite efficiently, even in flagrante delicto. That’s agile pairing for you.
😉

It was interesting to hear a summary of agile methodologies from an expert in the field. As someone who lives and breathes agile, Stuart was able to condense the essentials into a very short session and add some great titbits of personal experience too. I’m looking forward to the next session, which will cover specifics of the processes followed by the Atlassian development teams. We will discuss how we can better integrate technical writing into those processes. Thank you Stuart for a very useful introduction to agile methodologies.

Update: A few hours after I published this post, Mary Connor wrote an awesome post over on Clever Hamster, entitled How does Agile affect documentation? If you’ve got to the end of my post and want to take the next step, Mary’s is the one for you.