In the last couple of weeks, I’ve been trying an experiment — using Twitter as a medium for release notes. It’s been interesting, so I thought you’d like to read about it. We could use Twitter in other ways related to technical documentation too, such as hints and tips or FAQs. Let me know if you’ve done that already!

I’m going to start with a short introduction to Twitter, mentioning particularly the aspects that I found useful when tweeting release notes. If you’re already a twitterologist, you may want to skip that bit. Then I’ll describe how we’ve used Twitter as a method of communicating the highlights of our release notes.

Twitter is a service that allows you to send short messages to anyone who is interested in reading them. You can sign up for a free account at http://twitter.com. Then just type in your message where Twitter asks somewhat abruptly “What are you doing?” and click “Update”. Bob’s your uncle, you’ve tweeted.

“Short” messages? Oh yes, very short, especially in technical writing terms 😉 The maximum length of each message, or tweet as they’re called, is 140 characters. There’s an art to saying something meaningful in such a short message. Especially when the message is a release note highlight. So be warned, you may spend quite a bit of time tailoring your tweet.

The tweet below illustrates a number of conventions tweeters use to make as much as possible of those 140 characters. I’ll tell you more about the conventions later, and how we can use some of them in our tweeted release notes.

According to some reports, there are approximately 10 million people using Twitter, and its growth rate is around 1,382 (more than a thousand) percent per year. (See Web Strategy blog.) That’s an awful lot of tweets to read. So what you do is “follow” people. Twitter will send you the tweets of the people that you are following. Similarly, other people will follow you so that they can read your tweets.

You can restrict the visibility of your tweets to only people you’ve allowed to see them. You can also block specific people from following you.

What I’ve found extremely interesting in Twitter is the conventions that have sprung up as people start using it for wider and more specific purposes. “Retweeting” is one of those conventions. If you like what someone said and want to spread the word while attributing the goodness to the original tweeter, you can “retweet” their message. Simply add the letters “RT” into your message, copy the original text, and tweet away. What’s more, there are Twitter clients that do this for you automatically. I’ve mentioned some clients later in this blog post.

In the tweet illustrated above, Alister Scott has retweeted one of my tweets. Thank you Alister 🙂

When you want to reply to someone, or refer to them in such a way that they’ll know you’re doing it, include an “@” and the person’s Twitter username. For example, “@sarahmaddox”. Many clients provide a “reply” option that does this for you. Clients also have a separate column or tab showing the @ replies directed to you, so that they don’t get lost in the main stream of tweets.

Another very useful convention is the #-tag. Let’s say you are sending a message about a particular subject, and you think other people would like to read and to send tweets about that subject on an ongoing basis. This may be for fun or for a more serious purpose. Just think up a keyword, prefix it with a “#”, and include it in your message.

Here are the realtime results for a Twitter search on “googlewave”. And here’s what people are saying right now about “funnywords”.

Other people will start using your keyword, and they will also search Twitter for other messages that contain the same keyword. Many Twitter clients will do the search for you. Twitter search returns results from all tweets sent by anyone in the whole wide world, not just the tweets sent by people you are following.

Combined with the #-tag, this makes a very interesting combination for our tweeted release notes.

A URL can be very long, consuming far too many of those valuable 140 characters. Luckily there are a few services on the web that will shorten your URL for you. The service gives you a short string that you can include in your tweet (or in an email, or a blog post, etc). When other people click the short string, they are bounced back to the service’s URL and then forwarded on to your original URL. Examples of such a service are TinyURL.com, bit.ly and tr.im.

One of the most magical aspects of Twitter is that you don’t have to go to Twitter.com to use it. There are a number of Twitter clients that add useful functionality to your desktop and make it possible to tweet from your phone too.

The clients have built in extra functionality as the Twitter culture evolves:

I have TweetDeck running on my Windows XP desktop and on my Windows Vista laptop. It’s built on Adobe Air and has a lot of useful features including a sophisticated search capability. Here’s what it looks like. In the left-hand column are some tweets from people I’m following. Next are replies sent to me (via “@sarahmaddox”). The two right-hand columns are specific searches I have set up. All this is configurable, including the order of the columns: 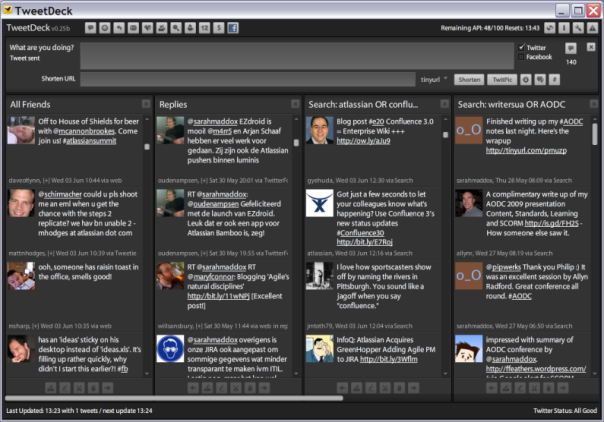 TweetDeck gives a handy notification when new tweets arrive from people you are following, or as replies to you, or that match your search criteria:

Want to read and send tweets from your phone? Well, you can. On my iPhone, I have both Twitterific and TwitterFon. I prefer TwitterFon — see screenshot further down this blog post.

You can also send tweets to Twitter via SMS. That’s what I did before I got the iPhone. So at least you can tell people what you’re having for dinner, even if you can’t read what they’re having until you get back to your computer 😉

So, how can we make use of all the above features and conventions to use Twitter as a medium for our release notes?

To emit a tweet per major highlighted point in the release notes, to include a link to the release notes and to provide a way for tweet consumers to see a collection of such related tweets.

In general, people read only the last few minutes’ worth of tweets. It’s not like email, where people make an effort to at least scan their inbox when they’ve been out of touch for a few hours or days. We need to make sure our design catches as many people as possible, and shows them where to go for more information if they want it.

Here’s the plan of action:

So far, I’ve tweeted about two of our product releases: the Atlassian Eclipse Connector 1.0 and Confluence 3.0.

For the Eclipse Connector 1.0, I used a tag of “#EclipseConnector10”. (#-tags are not case sensitive, because the Twitter search is case agnostic.) Here’s a screenshot of the resulting search on the Twitter.com web UI, at a particular point in time: 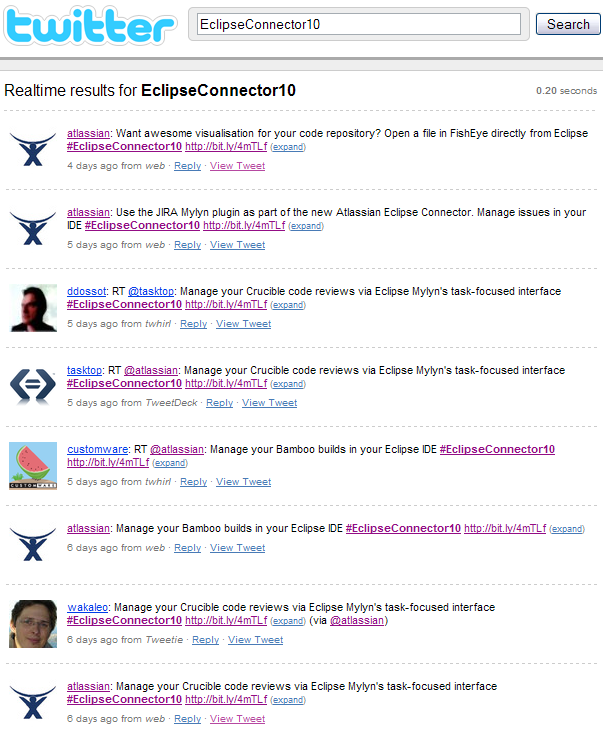 In the above screenshot, you can see the format we’re using for each tweet: the text of a highlight from the release notes, plus the #-tag (“#EclipseConnector10”) plus the short URL (“http://bit.ly/4mTLf&#8221;). Here’s the full content of one of the tweets:

Of course, the search may or may not show something quite different if you click it now.

What’s interesting is that I tweeted using the Atlassian account (the tweets with the dark blue icon of a dude holding up  slice of the globe) and other people retweeted or just repeated the tweets. ‘Coz they liked them. Those are the entries with “RT” in the above screenshot.

For the Confluence 3.0 tweets, I used the tag “#Confluence30”. Here’s a screenshot of the resulting search on the Twitter.com web UI, at a particular point in time: 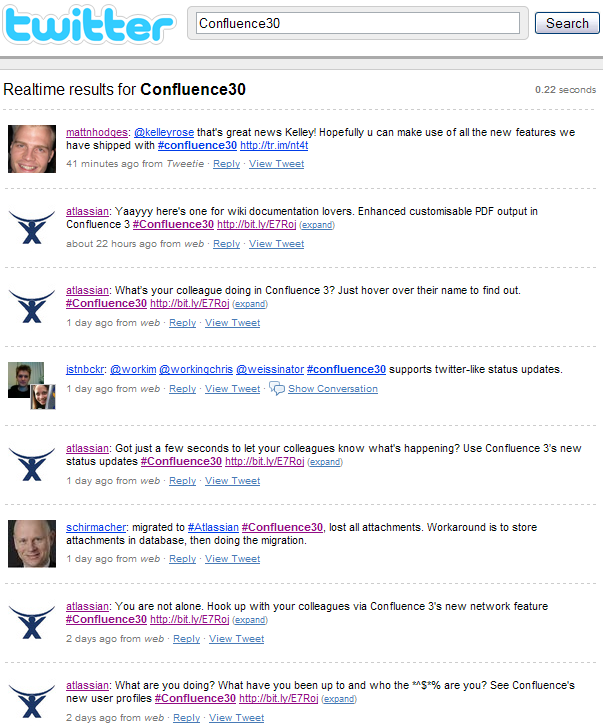 And here’s a screenshot showing the resulting search via TwitterFon on the iPhone: 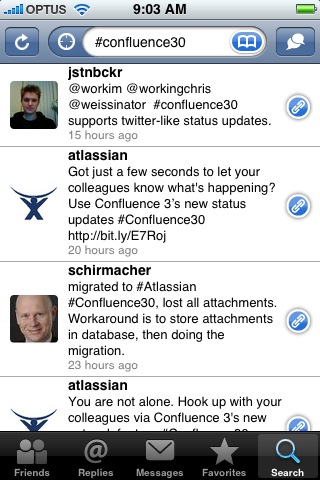 And you can check what the search yields now.

Heh heh. Take a close look at the two screenshots above. One person “hijacked” our #Confluence30 tag to communicate a problem he had when upgrading to the new version of Confluence, and the workaround for the problem

Of course, it was totally foreseeable that people would tweet problems as well as praise, and would include “our” #-tag in their tweets. Nothing is sacred on Twitter. We decided it would be interesting to go ahead and see the sort of response we get. After all, people are saying all sorts of things about us all the time, on and off Twitter.

The iPhone screenshot above shows the same person’s problem tweet, plus another person who was letting people know about a particular feature in the Confluence release (Twitter-like status updates).

It’s been a fun and interesting experiment.

People are getting very creative with Twitter. Wikipedia lists some of the unusual situations where Twitter has proved useful.

As technical writers we can probably think up a gazillion ways to use Twitter. We could tweet hints and tips, or even FAQs if we’re super wordsmiths, using the #-tags and shortened URLs much as I’ve shown above. Have you tried this or anything similar?