Yesterday I attended the first techfest organised by OLPC Australia. It was a full day of talks, demonstrations and workshops aimed principally at people who might want to get involved on the technical side. I’ve come away with much more knowledge of the OLPC project itself as well as the hardware and software involved on the server and laptop sides.

The day was hosted by Pia Waugh and Jeff Waugh, with talks and workshops by Martin Langhoff and Joel Stanley. There were about 30 people, I’d guess. Most of the interest was in the technical side of things, but I did talk to a teacher who had travelled and worked in various African countries and is now working in Aboriginal Education in Sydney. For her, it was the educational aspects of the project and the instructional design of the hardware and software that are important.

In case anybody wants to know how you can get involved with the project, I’ve highlighted some bits in purple italics below.

One of the breakout sessions at the end of the day:

The day’s first talk was an overview of e-learning and its challenges by Martin Langhoff. He covered the key factors arising from educational research, which drove the design of the XO and the thinking behind the OLPC project. We zigzagged between educational theory, anecdotes and technical specifications.

I didn’t get a good photo of Martin, but there’s one on the OLPC web site.

Here is some of the educational theory:

Here are some of the environmental factors:

What about content — what information is or will be contained on the laptops and/or school servers? The project will be making a lot of use of Wikipedia. Here’s one place where people other than developers can help. They need good-quality content, principally in simple English or Spanish. Information about local culture is useful. Localisation of content to the small regional areas is very valuable.

Another way to contribute is to try out the new activities that developers are creating and give feedback. You can get a Sugar emulator. If you’re on Linux, they say that’s easy. Otherwise, you need to install vmware first.

Martin mentioned this concept in his talk and I’ve put it in a section on its own because it’s so interesting.

The problem: There’s so much information out in the world. Even if you restrict yourself to Wikipedia (ignoring all debate about Wikipedia as a source of information), there’d still be a problem putting the whole of that single repository onto an XO laptop or an XS server. (More about the XS below.)

The OLPC has spearheaded the concept of a wiki slice as a way of delivering a cut-down set of information in a compressed format. The plan is to devise a set of scripts to select the appropriate information. For example, you might score the articles by popularity to decide what should be included in the cut-down information set. There’s a page on Wikipedia for the WikiProject Wikislice now too.

My thoughts: I work at Atlassian, which produces the Confluence wiki. At the moment, the wiki slice project is aimed at MediaWiki, which powers Wikipedia. I wonder how much work it would be to adapt the scripts to work on Confluence, or on other wikis? Also, we’re often asked about offline use of the wiki content. Could the wiki slice technology be useful outside OLPC?

And the Microsoft Windows thing? According to Jeff Waugh, that’s just not relevant. Martin’s view was similar: The OLPC project is just forging ahead. The answer to doomsayers is along these lines:

We’ve done it. We are shipping laptops. Over 100 000 laptops are out there now, in the hands of children or being distributed.

At the moment, they’re working towards distributing 240 000 laptops in Peru, to between ten and fifteen thousand schools.

The OLPC project is not spending time on Windows integration. They’re also not stopping it. They have implemented a dual-boot option, which will be made available to those countries who want it. Windows will come on an SD card, at an extra cost of USD 10 ($3 for the operating system plus $7 for the card). If you boot with the card in, you’ll get Windows otherwise the XO will boot Linux. OLPC does not intend to prevent countries from loading Windows onto the laptops. Freedom of choice is integral to the world of open source.

What’s a pity is that the dual-boot feature will negatively impact the fast suspend/resume feature of the BIOS. The current version aggressively goes to sleep when not in use and resumes fast when needed.

Perhaps, when countries see that it doesn’t really work to use an unsupported legacy operating system, this will all blow over 😉

In the second talk of the day, Jeff Waugh told us about the goals and status of OLPC in Australia. The goal is to support OLPC-related activities on this side of the planet. This will extend the reach of the project, because we are close to countries in Asia-Pacific region which need the XO and we are also close to people who are keen to contribute.

Areas of interest are:

OLPC Australia aims to build up a community of people who can contribute:

Trials are being set up at the moment in metropolitan and regional schools, in Northern Territory and remoted Queensland, and in the Pacific. They are looking for volunteers to help set up the deployments. The work would be for a few weeks in one or two months’ time.

Jeff says that the project has had a good response from government. The current government aim is that “98% will have access to the National Broadband Network”. Geoff’s response is, “We are the other 2%. And we are an education project.”

Senator Kate Lundy took an XO to a Labor Party meeting. Kevin Rudd liked it. We know, because the XO took a photograph of his smile.

Jeff sees a huge opportunity in the Intervention project, and there are two state education departments interested.

OLPC Australia is looking for corporate sponsorships. As yet, there is no framework, but they are interested in any organisation which can give a concrete idea of how it can help.

OLPC Australia will also replace some of the content on the XO with Australia-focused information, such as the wiki slice content which deals with US presidents.

Live a life of XS – the school server

The third session was presented by Martin Langhoff covering the XS, or school server.

Until now, deployments have used standard server setups. Peru will be the first major deployment with the new XS which Martin is working on. At the moment, the focus is on infrastructure, backups of the XO laptops and configuration management tools. They also plan to look at security in more detail.

The physical design of the box caters for high temperatures. It will either hang, or rest on an integrated stand. The machine itself will take up one third of the space, the other two thirds will be just air flow. No fans.

Due to the unique nature of the project, a radically different administration model is needed. This is interesting to any system administrators out there. Martin is basing his ideas on models used at NASA, among others. Tools are based on the work of Steve Traugott and his infrastructures.org.

It’s a client-pull model, due to the problem of sporadic connectivity. The idea is that the servers keep track of which machines have managed to pull down the updates, so that the others can be manually updated via a USB stick.

There will be little or no end-user interface on the server. Initially, a technician will configure the server via auto-install. The server will be shipped to the school. With a bit of luck, someone at the school will plug it into a power socket. And that’s it.

Power supply may be sporadic. So the server needs to be able to roll back to a safe state if an update finished unexpectedly. Everything must just work. Martin calls this,

turning a complex server into an appliance.

What about passwords? How do we deal with the fact that a small team of technicians will be looking after thousands of machines? It’s not a good idea to have a master admin password that works for all time over all machines. The solution: At installation of the server, it will generate a list of one-time passwords which are unique to the server. This list will be stored at the network operations location. When the technician goes to a particular server, he will take a USB stick with ten or so of the passwords. This minimises the impact of a lost or publicised password.

Martin is also looking at content repositories. They need some way of sharing content among the schools. The content might be developed by teachers, an education department or even the children. The repository must be lightweight and distributed. It will support SCORM and IMS packages. World organisations such as WHO may even provide content this way.

Martin talked about the complexities of programming where you must look at long-term support, as opposed to regular updates being possible.

We can’t distribute emergency patches to the laptops or servers. After doing each bit of programming, we must consider all the important failure scenarios. This is very challenging.

A note also, that the laptops are independent of the servers. You can think of the server as an extesion of the laptops, providing backups, extra content, etc. When there are up to 20 or 30 laptops together, they communicate via the mesh networking — the “bunch of laptops under a tree”. When there are more laptops in the group, the server acts as a mesh portal, coordinating so that the network runs more efficiently.

Gung ho on the XO — the laptop

Joel Stanley gave the final talk of the day, before we broke up into groups to look at the machines themselves.

Joel ministering to an XO:

Joel gave a technical overview of the machine, starting with a look at its innards. We hopped from chip to chip, and a lot of it went over my head. Some snippets:

The star of the day 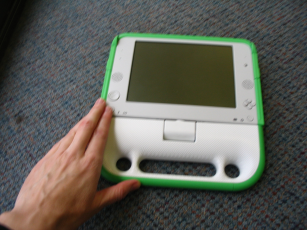 Side view, with a Samsung mobile phone:

Innards of the XO:

XO screen showing the Neighbourhood. Each little figure represents another XO or a shared activity: 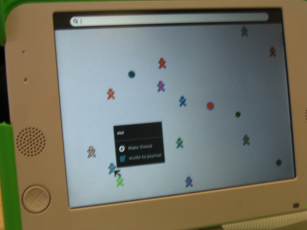 XO screen showing the activities currently loaded. This one shows (going clockwise from the top) two instances of Turtle Art, Draw, the always-present activity at the bottom (I’ve forgotten what it’s called), two instances of Chat and the Distance activity:

XO screen showing the Distance activity. Two laptops can measure the distance between them by blurting sounds at each other: 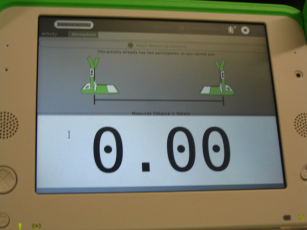 The OLPC project is interesting on so many levels — technically there’s a lot of innovation and scope; but also politically, socially, economically and philosophically it’s one of those grand schemes that come along rarely.

When I first saw pictures of the XO laptop I was disappointed, because it looks a bit like one of those pretend-computers that you give to toddlers. It’s not. Those are toys. The functionality is limited to what is pre-programmed into the box. In contrast, the XO is a serious collaboration and learning tool which intrigues developers as much as children. In fact, it aims to rub out the line between the two.